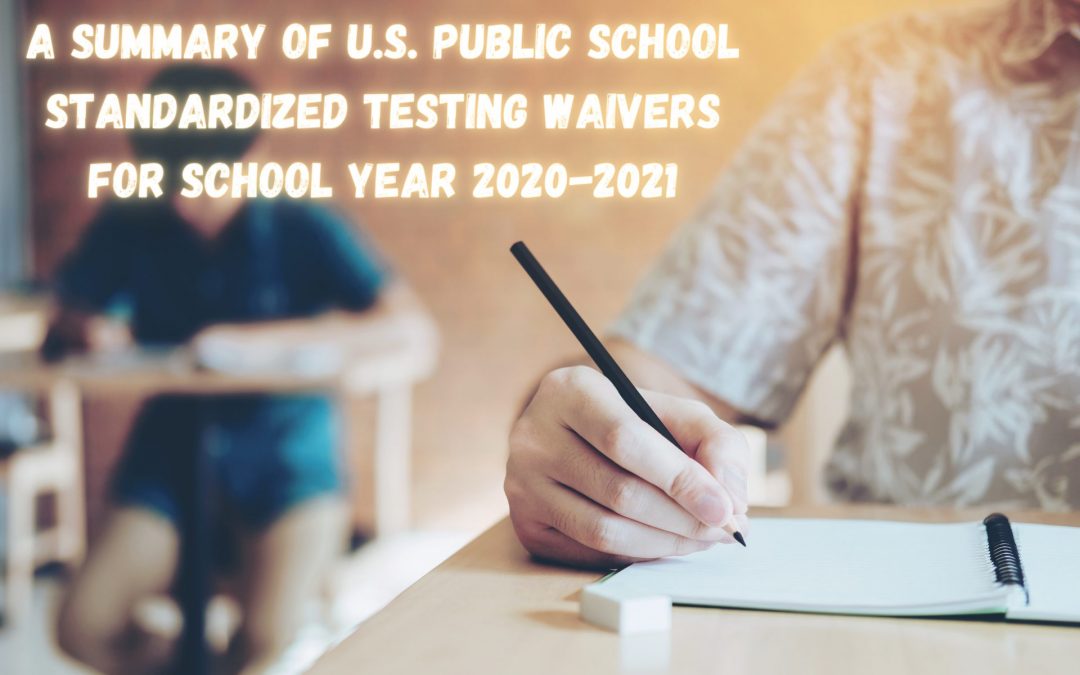 As the 2020-2021 school year grinds through its last three months, many states across the country have either gone to full time virtual learning or have adopted a hybrid combination of virtual and in-class learning.  These decisions are necessitated in response to the continued pressure of the Coronavirus-19 pandemic and concerns about several virus variants that have been tracking through the U.S. population.

The last time we reported on changes to standardized testing requirements, we wrote that “school districts are working hard to make the adjustments necessary to keep students engaged and in the academic loop, keep teachers employed and paid, and make sure deserving seniors graduate this spring.” That was a year ago.  Here we are 365 days later, and these facts still stand.  And now April is just one month away, meaning, it’s nearly time to begin the standardized testing drill again.

Last year, then-Secretary of Education, Betsy DeVos, announced in a press release, that the department would be offering schools an option to bypass standardized testing for the 2019-2020 academic year as they cope with the impact of the health crisis.

For point of reference, states are generally mandated to test students in grades three through eight annually and then again just once during the high school years.  The tests are designed to cover a student’s understanding of common core subject matter, including English and Math.  Test results are often used “to judge school, and sometimes teachers, on their performance, and they can trigger improvements efforts.” (Source:  USA TODAY, see below reference.)

NPR reporter, Cory Turner, wrote in September 2020 that “Education Secretary Betsy DeVos recently sent a letter to schoolteachers around the country reminding them that last spring, she waived the federal testing requirements “in reading, math and science because nearly all K-12 schools were closed.  But this Year (i.e., the 1920-21 school year) kids need to take those tests.” (https://www.npr.org/2020/09/17/911482773/betsy-devos-says-students-will-need-to-take-federal-standardized-tests-this-year )

Although Ms. DeVos’ decision engendered some criticism from teachers, she also gained some advocates in the debate. (At the time, the National Urban League and the National Center for Learning Disabilities weighed in on the Secretary’s side, but the National Education Association/NEA did not.) Turner further reported that “In her letter, the education secretary argues these end-of-year tests are one of the most reliable tools we have to tell us what children are learning or what learning they’re losing while schools are closed.”

Two months later, in November 2020, a presidential election took place and now a new president is in office just as standardized testing schedules are about to kick in for another year.

A February 23, 2021 USA TODAY article by Erin Richards and Elinor Aspegren reports that the U.S. Department of Education, as per Monday, February 22, says that “States will need to administer annual standardized achievement exams to students this year, but they can modify or delay the tests.”  (https://www.msn.com/en-us/news/politics/schools-must-give-students-standardized-tests-this-year-biden-administration-says/ar-BB1dV54o?bep_ref=1&bep_csid=21268+%22+target%3d%22_blank%22%3eRead+the+Article )

Ian Rosenblum Acting Assistant Secretary, United States Department of Education Office of Elementary and Secondary Education, in a February 22, 2021 letter to all Chief State School Officers, writes: “State assessment and accountability systems play an important role in advancing educational equity. At the same time, it is clear that the pandemic requires significant flexibility for the 2020-2021 school year so that states can respond to the unique circumstances they are facing; keep students, staff, and their families safe; and maintain their immediate focus on supporting students’ social, emotional, and academic development.” (https://www.wishtv.com/wp-content/uploads/2021/02/dcl-assessments-and-acct-022221.pdf)

In the same letter, Mr. Rosenblum offers three areas of accepted flexibility in testing regulations for the 2020-2021 school year:  Accountability and School Identification, Transparency and Public Reporting, and Assessments.  In closing, Rosenblum invites Chief State School officers to contact him with any further questions, at OESE.Titlei-a@ed.gov.

WHO IS THE NEW SECRETARY OF EDUCATION?

Simple answer – we don’t know yet.  Nominee Miquel Cardona (Connecticut Commissioner of Education) has not yet been confirmed by the U.S. Senate. During his confirmation hearing, Mr. Cardona did not indicate whether required standardized tests would be waived this year but did verify his belief in the importance of assessing student progress.  He also indicated that schools should not be obligated to bring students back to the school building just to administer the exam. “Certainly we do not believe,” said Cardona, “that if there are places where students are unable to attend school safely in person because of the pandemic that they should be brought into school building for the sole purpose of taking a test.”

“States can decide whether to shorten the annual exams, administer then remotely or delay giving them until summer or fall,” and “Schools won’t be held accountable for the results of how students perform.”

Lauren Wellbank, writing on Tuesday, February 23, 2021 for the website SheKnows, wrapped it up this way: “The Education Department announced Monday that while they’re OK with states postponing or delaying standardized testing, school are not allowed to outright cancel this year’s tests.  The Biden administration made the mandate and released the accompanying accommodations this week – schools can elect to move the dates, shorten the tests, or offer online testing options where remote learning [is] still necessary – but reiterated that the annual testing still had to be completed by school districts for the 2020-2021 school year.”