Homeschools and the School Voucher System 2022 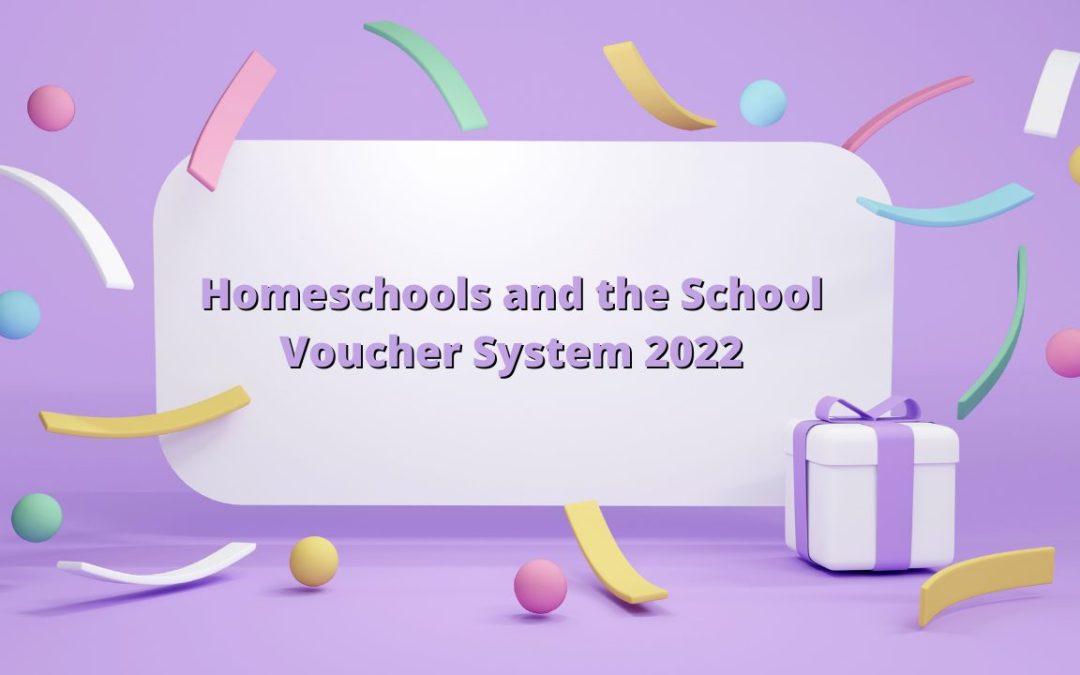 School voucher programs have been around for a while, but until now, most states did not participate.  Now, in October 2022, there are 30+ states taking part in the program, but the regulations surrounding the programs tend to vary from state to state.

WHAT IS A SCHOOL VOUCHER PROGRAM?

School voucher programs give parents the opportunity to use public funding that is budgeted for public education.  Theoretically, a parent can access whatever the per-student dollar amount is for their own state and use those funds toward tuition at a private school of their choice.  This generally includes religious schools.  The “catch” is that most voucher programs start out by defining/limiting who is eligible to participate.  (For instance, not all states allow parents to use voucher money at schools affiliated with a religion.)  In some states, but not all, voucher funds can be used for homeschooling. (Are There Public Resources Available to Homeschoolers? | IEP and Homeschool | Understood)

The primary idea is that funds would go first to students with disabilities, students zoned to failing schools, or students from low-income families from the “most targeted” student groups.  A few states have expanded voucher programs to include middle-income families.  The first voucher program, as currently defined, began in Milwaukee, WI in 1990.  Many programs have spun-off from the original Milwaukee program.  Today, requirements and standards for the programs vary from state to state.

ARE ALL SCHOOL VOUCHER PROGRAMS THE SAME?

In addition to programs varying from state-to-state, there are basically three different types of voucher programs.

2. Education Savings Accounts (ESA) – The basic difference between an ESA and a regular voucher program is that public school vouchers can only be used at participating/approved schools.  With ESA funds, the state education system sets aside individual accounts for approved students.  The money can be used for private school tuition, but it can also be spent for the costs associated to homeschooling, such as online courses or tutoring fees.  In some pre-approved cases, ESA funds can be used on certain types of prescribed therapy.  In addition, ESA funds can be used at any school the parent chooses for their child.

3. Tax Credit Scholarships – This is a program where states give businesses or individuals within the community a certain level of “tax credits” that must be donated to a bonified/approved scholarship organization or program.  Qualified students then must apply for the various scholarships and, if they receive the scholarship, they can apply the money towards tuition at a private school.

It’s interesting to note that teachers’ unions, generally, tend to oppose school voucher programs.  The reason behind this opposition is that they believe any system that allocates public tax dollars to either individuals or non-public agencies or that withdraws dollars directly from public funds is fundamentally unconstitutional and non-representational of the public interest.

Many education researchers and scholars posit that if public school vouchers are used by parents to send their children to private religious schools, the constitutionally required separation between church and state will be violated.  Legally speaking, this is not the case.

Twenty years ago, in 2002, the U.S. Supreme Court ruled that “a state-enacted voucher program in Cleveland did not violate the U.S. Constitution’s prohibition on government establishment of religion.  In fact, the Court found that the voucher program was constitutional because it served a valid secular purpose, and it was neutral to religion.” (Zelman v. Simmons-Harris).  This simply means that parents choose which schools the voucher money goes to, not the individual states.

As with most sensitive topics, this one has two sides to be considered before making a decision.  Voucher opponents insist that vouchers will invariably create unwanted regulation of homeschools.  Those in favor of voucher programs insist that there’s really no risk of this happening to homeschools and vouchers could provide huge public policy benefits for conservatives.

Of course, voucher programs that pay homeschool expenses are a massive incentive for parents to pull their kids out of public schools. The transfer of kids from public schools to homeschools would hugely benefit the homeschool movement.

WHERE DO VOUCHER PROGRAM DOLLARS COME FROM?

K to 12 schools in the U.S. receive approximately $60.34B total funding from the federal government, or an average of $1,193 per pupil.  In addition, states contribute a total of $357B to K to 12 education or $7,058 per student.  Local governments also contribute for a total of $347.4B or $6,868 per student. The money that goes into the school voucher program comes from individual states.  Each state distributes the money it already allocates for each student’s public education to that student’s family.  Federal and local government education dollars are not currently used for school voucher programs.

In the U.S., school funding is constitutionally mandated by the 10th amendment which is the basis for making education a function of the states.  A modern day “translation” of the 10th amendment is: “Each school district is administered and financed by the community along with that district’s state government.”

WHICH STATES HAVE SCHOOL VOUCHER PROGRAMS?

Kate Kelly, writing for the online magazine Understood, has done a great job answering the question: “Can school vouchers be used for homeschooling expenses?” Kate’s research can be found at: School Vouchers: What You Need to Know | Understood .

In states where school vouchers pay homeschool families, a family with two children could receive up to $18,000 to homeschool, depending on where they live.  This is definitely an incentive that might move children out of public schools.  But the question remains: on a state-by-state basis, will state legislatures allow homeschool families to get the same payments as public schools and private schools?

The final word is, that how much school voucher programs will expand, depends mostly on state constitutions.  Some states have constitutional language that bars government aid to religious institutions.  While each state approaches school vouchers differently, there are common questions states must address when developing their voucher program.  For more information about these questions, goto:  Interactive Guide to School Choice Laws (ncsl.org).  The site provides a table showing how each state with an existing school voucher law has answered these questions.