Standardized Testing:  How Do Homeschoolers Measure Up? 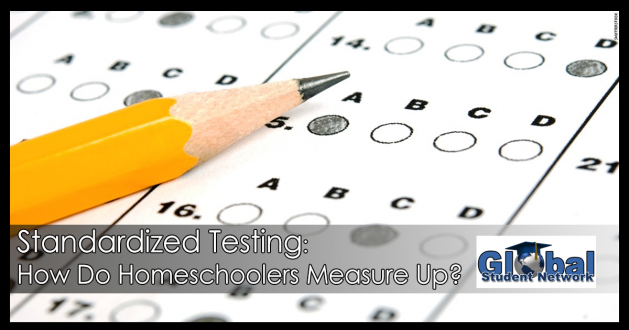 Testing is not an unusual construct in the K-12 education world, whether tests are administered in public schools or in homeschools.  Most school-aged children in the U.S. have taken a national or state-based standardized test at one time or another.  Kids get stressed out when they’re tested, whether they’re sitting down to take a “regular” teacher-designed test or the test is “standardized.”  Parents react to their children’s stress.  What has happened around the standardized testing conversation is that parents, teachers, and administrators have come down on sometimes opposite sides of the standardized testing “pros” and “cons” discussion.  The result is that the concept of standardized testing has become a serious “hot button” issue, especially for parents who have elected to pull their children out of public schools and educate them at home.

In Favor of Standardized Testing

Those who come down on the “con” side of the dialogue, cite numerous reasons standardized testing does not benefit students, including:

How Homeschool Measure Up

Supporters of the homeschooling movement point out that homeschooled students tend to perform above the national average on SAT (in fact, 72 points higher) and ACT tests (the average score is 21 and homeschoolers test out at 22.8 out of 36 points).  Homeschoolers also perform at the 77th percentile on the Iowa Test of Basic Skills. The Washington Times has pointed out that “there are two main factors for these outstanding results:  the educational environment where learning takes place, and the individualized, one-on-one instruction.  Most home-school students are directly taught by their parent, who love their children enough to make the sacrifice to stay at home to make sure their child is taught in a safe and loving learning environment.  Second, one-on-one instruction emphasizes the best interests of the child rather than the best interests of the group.”  (http://www.washingtontimes.com/news/2009/aug/30/home-schooling-outstanding-results-national-tests/ ).

Demographically speaking, homeschoolers tend towards higher academic achievement, for a variety of reasons:

An Internet search quickly yields a number of organizations that offer a wide variety of standardized test packages for homeschools. Some twenty states require standardized testing for homeschool students.  College attendance often hinges on SAT or ACT scores and, more often than not, not taking these tests at all will make it harder to get into college, than it would be to take the tests and receive a low score.  The best a parent of a homeschooled child can do is prepare their student for the necessity of at least some standardized testing, and be assured in knowing that homeschooled students tend to do better on standardized tests than do their public school counterparts.