Why Teach Civics to Homeschoolers 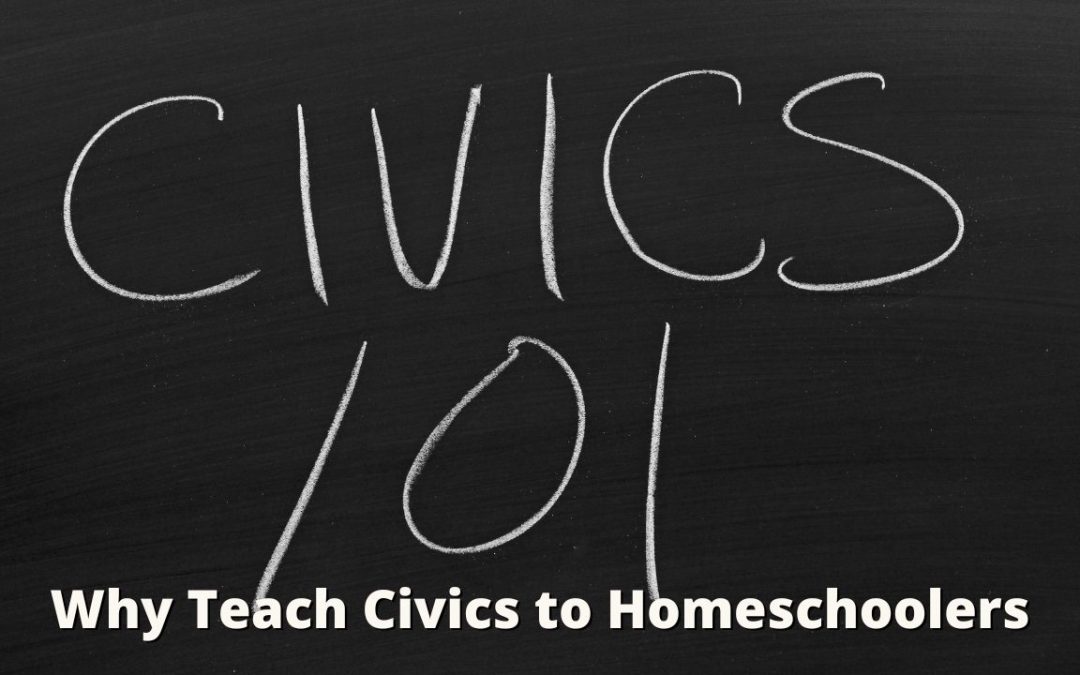 Simply stated, Civics is the study of how our government works and the part American citizens can play in their own government.  Civics is often required to be a part of public-school curricula, and many state homeschool laws require the subject be included as part of a core curriculum.  Why?  Because, regardless of a family’s political preferences, the study of civics is crucial to preparing our children to be well-informed U.S. citizens.

One of the great lessons that can be learned from understanding the structure of our government is that students will learn to connect the past and the present as a part of becoming informed future voters.  If homeschoolers understand the way our American government works, it will be easier for them to make sense of real time current events and will give them some sense that there is a functioning system set up to solve modern issues of our society.

“Civics helps students engage in critical thinking and writing, which engages those 21st century skills that will be essential in their future. In examining civics, we cultivate empathy.” (Amanda Setters, Curriculum Associate, iCivics, https://www.icivics.org/about )

A quick list of how homeschoolers can benefit from a civics education includes:

A CIVICS EDUCATION SHOULDN’T STOP IN THE HOMESCHOOL CLASSROOM

According to the website icma.org, “The earlier students learn about the impact that local government has on their lives and how much their voices and votes make a difference, the better for all of us.” (https://icma.org/k-12-civics-education)

Dr. Brooke Blevins, Co-director of Baylor University’s iEngage Summer Institute, points out that “Without civic engagement, civic knowledge only does so much good.  Whether it’s a donation drive to collect supplies for abused children,” or any other participation in the local community, “K-12 educators have an opportunity to… guide and teach students how to be active members of democracy far beyond election season.”

CIVICS LESSONS CAN BE FOUND EVERYWHERE

There’s no need to limit your homeschool student to reading civics textbooks.  There are many other context-based ways to learn about what’s happening in our government, how the government operates, and what role your student can play in the process, both now and as an adult.

Read the Newspaper – This used to be the main way we all learned about what was happening in our world.  Now we’re more focused on responding to click bait and reading news in a squeezed and commercialized “entertainment”-focused mode on the Internet.  Newspapers still exist.  Buy one or subscribe to one and sit down with you student and show them what can be learned from a great newspaper.

Read “living books” about civics – Living books are generally written by someone with a passion for the topic or someone who has experienced the subject matter first-hand.  Readers tend to engage in living books and are drawn to learning more about a subject.

Fewer than one fourth of eighth graders tested “proficient” or higher on the National Assessment of Educational Progress (NAEP) civics exam in 2016.  Even students studying advance coursework don’t score well.  The average score on the AP Government and Politics exam is near the lowest of all forty-seven AP exams. Barely half of the students who take this AP exam pass at all. And it’s not just kids who are lacking knowledge of American civics.  A recent Pew Research Center study found that only one in three Americans can name one of three branches of government.

American civics is disappearing from K to 12 programming.  Our country is nearly 250 years old, so this is a great time to learn about what principles guided our forefathers in creating “one Nation, under God, indivisible, with liberty and justice for all.” (SOURCE: Pledge of Allegiance, 1954, current version, per 4 U.S.C. Section 4)